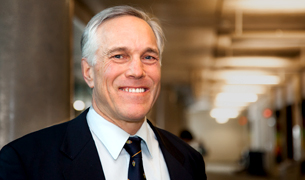 Professor Allen was the Director of the Pulp and Paper Centre at the University of Toronto from 2001-2003, and, before that, Associate Director; from 2003-2007, he was the Associate Chair, Graduate Studies, in the Department of Chemical Engineering & Applied Chemistry. He served as Vice-Dean, Undergraduate, of the Faculty of Applied Science & Engineering from 2007-2011 after which time he was appointed Department Chair.

Between his masters and doctoral studies, Professor Allen worked with Esso Petroleum’s Process Control group and spent his research leave in 1994 with Weyerhaeuser Co. in Tacoma, WA, where he worked on the biofiltration of air pollutants from wood products emissions. In 2011 he spent his research leave with SCION, a Crown Research Institute in New Zealand working on biorefineries for producing renewable energy and chemicals.

Professor Allen’s area of research interest is in Bioprocess Engineering, with particular application to the treatment of aqueous and gaseous emissions and bioconversion processes to convert wastes and renewable raw materials to energy and chemicals. Presently, he has written over 100 refereed publications and has led several environmental research consortia involving faculty and students from a range of disciplines and industrial partners from Canada and around the world (USA, Brazil, Japan, New Zealand). In 2014 he received the LeSueur Memorial Award for technical excellence from SCI Canada and the Chemical Institute of Canada.