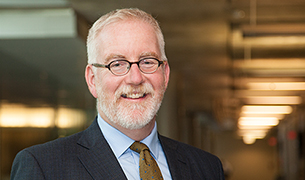 Professor Markus Bussmann is Chair and a Professor in the Department of Mechanical & Industrial Engineering.

Professor Bussmann joined the University of Toronto in 2002, was promoted to Associate Professor in 2008, and to Professor in 2015. From 2009 to 2013, Professor Bussmann served as the Associate Chair and Coordinator of Graduate Studies for MIE, during which he launched several MEng certificate programs and the flex-time PhD option. He was also active in the recruitment of top graduate students to MIE, resulting in significant enrolment growth for both research-stream and MEng graduate programs. From 2013 to 2017, he served as Vice-Dean, Graduate Studies in the Faculty of Applied Science & Engineering.

His research interests focus on the development and application of models for interfacial flow, heat transfer and phase change associated with various materials processes, often in collaboration with other researchers. His work has earned him a number of awards, including best paper awards at the 2011 Technical Association of the Pulp and Paper Industry (TAPPI) PEERS Conference and the 2014 International Chemical Recovery Conference. Professor Bussmann was named a fellow of the Canadian Society for Mechanical Engineering in 2011, and served as a director of the Computational Fluid Dynamics Society of Canada from 2008-2013.

Professor Bussmann also greatly enjoys teaching. For many years he coordinated and taught the first-year course APS106 – Fundamentals of Computer Programming, and has also taught undergraduate and graduate courses in engineering math, fluid mechanics and computational fluid dynamics. He is a three-time recipient of the MIE Teaching Excellence Award, in 2009, 2011 and 2013.