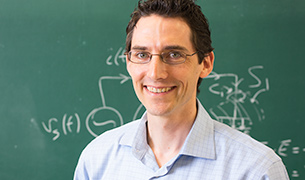 Professor Stickel first came to the Faculty when he started as an undergraduate in 1993. Since that time, he has completed his BASc (1997), MASc (1999), and a PhD (2006) — all with a focus on electromagnetics and the development of novel devices for high-frequency wireless systems.

He has a great interest in engineering education and the use of technology to advance the student learning experience. Professor Stickel is known as an innovator in the classroom, incorporating tablets into his lectures and integrating online peer support, assignments, and quizzes into his courses. In addition, he is also engaged in scholarly work to quantify the impact of new technologies in teaching, publishing three papers on the subject.

As a result, Professor Stickel has been honoured with three departmental teaching awards and was selected as a New Faculty Fellow at the 2008 Frontiers in Education Conference. In 2012, he was awarded the Early Career Teaching Award by the Faculty of Applied Science & Engineering. In 2014 the American Society for Engineering Education named him one of their Top 20 under 40.