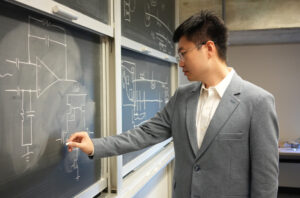 Restore, regulate and repair the brain with precision electronic devices — these are my research team’s goals. We have recently developed intelligent brain implants to regulate disorders such as epilepsy and Parkinsonism, sensor brain interfaces to restore lost sensation from brain and spinal cord injuries, and therapeutic stimulators for neural repair and regeneration. The devices have shown superior clinical efficacy when compared to conventional medications for neurological conditions. According to the World Health Organization (WHO), one in six people around the world suffer from such neurological conditions — brain and spinal cord injuries, strokes, epilepsy, Parkinsonism, Alzheimer’s diseases and more — and technologies that interface neurological systems via electrical signals have great potential to improve the quality of life for millions of patients worldwide. I will conclude the talk with future directions for our research.

Xilin Liu is an Assistant Professor of Electrical and Computer Engineering at the University of Toronto and an Affiliated Scientist at the University Health Network (UHN). His research focuses on advancing integrated circuits (ICs) and machine learning for health-care applications, especially in neural interfacing and neuromodulation. He obtained his PhD degree from the University of Pennsylvania. Between 2016 and 2021, he held industrial positions at Qualcomm, where he conducted R&D of consumer IC products in high-volume production, including the industry’s first 5G chipset. He was a visiting scholar at Princeton University in 2014. He has co-authored two books, three patents, and over 30 articles published in many venues, including Nature Electronics. He has received three Best Paper Awards at top-tier IEEE conferences. He also received the 2020 Qualcomm Star Award and the 2016 IEEE Solid-State Circuits Society Predoctoral Achievement Award.

Once you’ve registered, you will receive a link by email to access the online talk.